While alcohol and drug addictions are widely known and considered serious problems, gambling addiction is still underestimated. Generally, it’s similar to other addictions as it’s associated with strong mental illness and may be either a cause or a consequence of other disorders.

Often, people hope that shiny slots or luxury roulettes can help them deal with depression or anxiety, but it always turns upside down and gambling makes these problems worse. 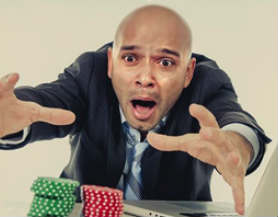 Dr. John Grant from the University of Chicago has studied several groups of gamblers, and he reveals that 76% of players suffer from depression and 16-40% feel anxiety.

At the same time, 24% of the surveyed individuals have a progressive bipolar disorder, while 12% of them have symptoms of the attention-deficit/hyperactivity disorder. Mr. Grant insists on the treatment of gambling addicts should include diagnosing and curing these problems, too.

As the UK is one of the gambling leaders, you might be interested in its stats. 56% of the British people gambled in 2016 and 1.2% of all these gamblers were considered pathological ones. Moreover, 6.6% of gamblers were at risk of addiction.

What is Gambling Addiction?

Now, let’s figure out the main definition of gambling addiction or (as it’s also called) problem gambling. Basically, it refers to a strong desire for gambling,which a person can’t control. Similarly to other addictions, this one can lead to significant harmful consequences and inability to stop, even when a gambler realizes the problem.

Causes of the Addiction

Basically, there is no one and only reason for gambling addiction. Instead, it is caused by biological factors, social triggers, and the person’s thinking. Also, some points are critical when it comes to addictions:

Some reports say that patients who take the medicine to fight Parkinson’s disease or restless leg syndrome are more vulnerable to gambling addiction. The reason may be at a higher level of dopamine.

Still, if you don’t have significant health problems, pay attention to mood changes, stress, and money problems as these can force you into problem gambling. A sudden huge win may also lead to pathological gambling because you will strive for higher jackpots. Finally, the casino-friendly regions like Vegas or Macau are the places to avoid for addicts; but with the rise of online casinos, the whole world has become the risk area.

Symptoms of the Disorder

While there are different definitions of gambling addiction, the APA lists a set of symptoms characteristic of this mental illness. To diagnose the problem, at least four of them should be detected within a year:

Medical screening aimed at detecting gambling addiction is harm-based. Different institutions have developed their own measures on the basis of APA’s list. Let’s say, you can undergo the NODS, the CPGI, and the VGS tests.

So far as this addiction is often underestimated, people think that consequences are slight – insignificant money losses, a bit of anxiety, and fatigue. In reality, gambling addiction is way more harmful. Here are some of the most evident problems:

Addiction Risks to Be Aware Of

Like any other addiction, problem gambling is a tricky malady, and various factors can sow the seeds of its growth.

Nowadays, there are lots of treatment methods used to deal with pathologic gamblers. But unfortunately, no certified practice guidelines exist. In the medical context, gambling addicts are provided with a wide range of rehabilitation opportunities, pharmacological treatment, individual psychotherapy, and even group/family therapy.

Among those mentioned, psychotherapy is the most frequently used method. Also, some varieties of it may be applied to treat betting addicts:

Gambling addiction may even trigger suicidal thoughts and suicide attempts, so it’s a serious illness, which is dangerous for gamblers. Remember about risks and never lose control over the gambling process, so you can enjoy this experience without issues. Play safe!